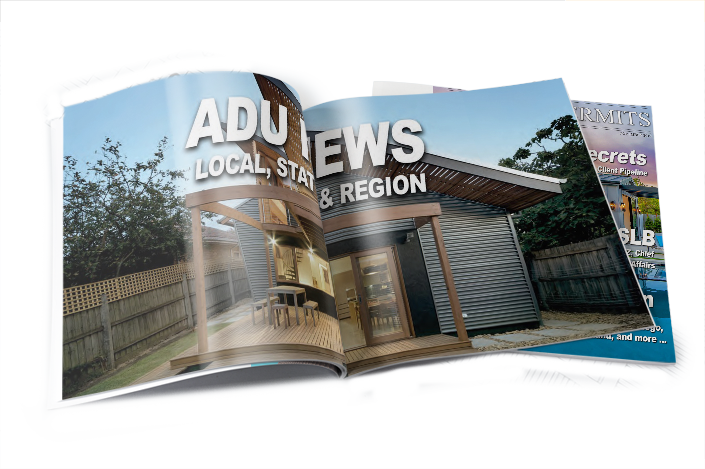 San Jose city leaders unveiled a series of measures this month aimed at making it easier for homeowners to build ‘granny units’ in their backyards.

“We need to look every potential tool in the toolbox that can help us get more housing built,” said San Jose Mayor Sam Liccardo. “Backyard homes can be one of those solutions.”

Mayor Liccardo hopes to transform San Jose into the state’s friendliest ADU city. This includes an express review ser- vice on Tuesdays, where homeowners can make appointments to meet directly with city staﬀ for a single, comprehensive review of their ADU application, for qualifying 1-story units up to 900 square feet. If no revisions are needed, homeowners could poten- tially walk out with a building permit in less than 90 minutes.

For qualifying homes, that could shave oﬀ nearly 20 busi- ness days, which is typically how long it takes to get approval. The city is also looking at creating a forgivable loan program.

More than 120,000 single-family homes in San Jose have room for a small ADU. The number of ADU permit applications has skyrocketed since 2016 to more than 40 applications each month. The city says a recent poll shows that more than 30% of San Jose homeowners are interested in building a backyard home or converting a garage or a part of their home for rental use. For more information on the city’s ADU program, click here.

The Colorado Springs City Council has been working on a draft ordinance to expand the use of Accessory Dwelling Units (ADUs). Although ADUs have been allowed in certain zone dis- tricts in Colorado Springs since 2003, AARP Colorado supports this thoughtful, community conversation about ADUs based on the housing model’s ability to help seniors age-in-place and provide more aﬀordable housing opportunities for all residents.

“There is a huge disconnect between available housing in the U.S. and Colorado Springs. When 53% of Americans either live alone or as a couple and only 12% of the housing is either a studio or one bedroom, ADUs can help fill that gap, especially for seniors.”

The advent of more ADUs in Colorado Springs is supported by a recent AARP survey of of people 50+ that found:

On its website, the Planning and Community Develop- ment Department maintains that “expanding the use of ADUs in single-family zoned neighborhoods will give property owners in all residential zone districts the same opportunity to provide acces- sible, and semi-independent, housing for family members or as an investment in the property. This ordinance will also loosen some of the strict requirements currently applied to ADUs in multi-family zone districts.” Visit the Planning and Community Development Department or for more information.

As more Bay Area commu- nities encourage residents to build accessory dwelling units (ADUs) that could serve as af- fordable housing, The Housing Endowment and Regional Trust of San Mateo County (HEART), a San Mateo-based nonproﬁt has received a $296,000 grant to design and promote construction plans for studio and one- and two-bedroom accessory units that could be built alongside single-family homes.

Known as the Green and Liveable Accessory Dwelling Unit Resource Program, or GLADUR. The design for the units would maintain local zoning laws and could be preapproved as a group by city and town planning departments and councils, pro- viding all the designs might not work in every city.

After San Mateo County design review, the non-proﬁt would oﬀer the designs for free to homeowners who could use the designs as approved or customize and ﬁnish them as they wish. Homeowners could download the plans from HEART’s website and the agency is trying to complete its ﬁrst designs by the middle of next year. After plans for detached units are created and distrib- uted, HEART plans to introduce designs for units attached to the main home or built within the existing walls of the home.

The plans could be especially valuable for communities such as Portola Valley and Woodside that have sky-high housing prices and many parcels with a surplus of open space. Both com- munities have recognized the opportunity for creating aﬀordable housing via ADUs by passing accessory dwelling unit ordinances regulating their construction.

Portola Valley’s ADU ordinance allows accessory units on 1 acre or larger parcels that have a house and are in a neighborhood zoned for residential construction. The homeowner is responsible for making sure that the main house and potential ADU do not exceed the total amount of allowable ﬂoor area for the parcel.The unit must also have the same address as the main house and cannot be sold separately. Either the unit or the main dwelling must be owner-occupied, according to the ordinance.

HEART was founded in 2003 and has invested more than $19 million in developing or rehabilitating homes in San Mateo County, provided loans for homebuyers and worked with the Paciﬁca School District to provide workforce housing.

When homeowners contact the City of Portland to replace a drafty, old garage with a new structure, they’re often encouraged to put a self-contained dwelling on top. The most popular rea- son to build: people love their neighborhood or low mortgage, and don’t want to move but they need more space – a guest cottage or in-law ﬂat – or they want to rent out an apartment for added in- come, says Kol Peterson, a Portland-based small housing advocate and educator who has been involved in ADUs for decades.

Homeowners who open their small second home to people on Peterson’s Portland’s Accessory Dwelling Unit Tours report that working with the city, as with any construction project, takes time: Plans often need to be revised, inspectors require changes. The reason potential ADU owners are in a hurry? Construction and other costs are rising, says Peterson, who wrote the comprehensive book, “Backdoor Revolution: The Deﬁnitive Guide to ADU Development.”

Since 2016, when Peterson started his popular ADU tour 800 people attended in June – he has asked new owners to de- tail the amount they paid for design, permits, utility connection plus construction labor and materials. Everything, he says, except landscaping and furniture. He updates expense increases on his Building an ADU website.

Excavation, concrete formwork and pouring a founda- tion alone typically costs $10,000 to $15,000, he says. Costs for detached, new ADUs have jumped $20,000 since he started his ﬁrst tour three years ago; the average costs per square foot has increased from $294 to $327.Building up to the largest allowable size – 800 square feet in Portland – is more common due to the cost. A 400-square-foot, detached ADU has an average develop- ment cost of $170,000, says Peterson. A homeowner can double the size for only $40,000 more, he adds.